The French Carbon Tax and the Gilet Jaunes

“If you bring that tax back, petrol prices will go up and you’re taxing people who need their cars. It’s that tax that made us turn up at the roundabouts and we’ll be back there again”

This was a Gilet Jaune’s angry response to reports that the “taxe carbone”, an environmental tax on fossil fuel use that sparked the Gilet Jaunes protests (and subsequently frozen by the government) might be about to make a comeback.

France’s experience should give pause for thought. Could a rethink be needed on how fiscal policy is used to support green aims? And to what extent has environmental policy been set back after the arrival of the Gilet Jaunes?

France’s current fuel tax was introduced in 2014 under President Hollande/Prime Minister Ayrault but the idea for it came from Hulot, ensuring that all 2007 presidential candidates sign an “ecological pact” and pledge a carbon tax on fossil fuels, aiming to encourage heavy fossil fuel users to gradually switch to lower carbon alternatives. The tax aimed to use price signalling to disincentivise fossil fuel use, with the carbon price on energy taxes (such as on petrol or diesel) increasing year on year.

But by the autumn of 2018 the Gilet Jaunes were complaining of rapid price rises in fuel and blaming the government’s carbon tax for it. The reality was that the price of fuel was rising anyway — in part because of wholesale prices rising from $70 to $80 per barrel between March and May 2018 combined with a weakening of the Euro against the Dollar over the same period. Added to a planned hike in the carbon tax for 2018, this led to an even higher fuel price by last summer.

The Government was not wholly at fault, but there was some culpability. Many protestors were aware that the tax on fuel was set to rise even further in 2019 — and popular social media campaigns protested against this. There was also anger that only 20 per cent of the revenues raised went to fund France’s “transition énergétique”. 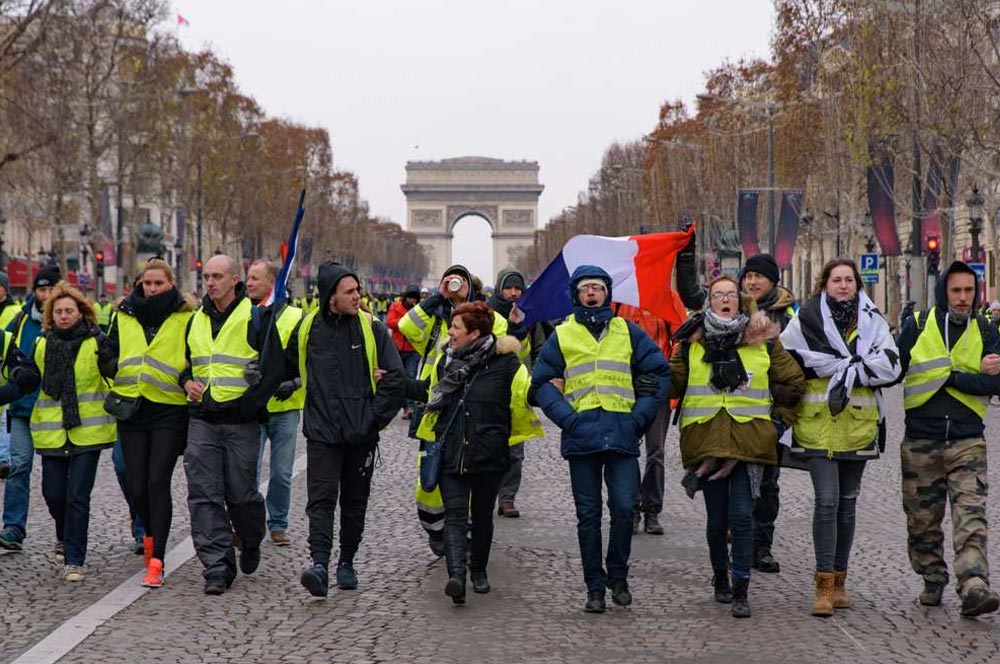 Furthermore, the government, in an attempt to fight air pollution, had reversed diesel subsidies — which it had hitherto incentivised — making diesel taxes higher than those of petrol.

People, particularly in less populated areas, felt unjustly targeted, and argued that, for them, the government had not introduced viable alternatives to car use. The fuel tax thus became the core of the early protests.

Also, as a regressive tax, the Government should have put in place subsidies for the poorest. But when, in the summer of 2018, a then En Marche deputy (and former advisor to Hulot) Matthieu Orphelin warned of impending discontent and suggested that the Government install an “exceptional and temporary” fuel subsidy for those in sparsely-populated areas, he was ignored.

Another problem was that the duty was a blunt tool, working well when prices were low but not sensitive enough to wholesale price rises. France has many sparsely-populated areas where car use is still unavoidable and the Government had perhaps not sufficiently examined programmes for moving towards alternatives like subsidies for low carbon vehicles, improving public transport or community projects. Former energy minister under Hollande, Ségolène Royal said: “The government said the tax was for environmental reasons. That’s a lie. The tax would make sense if as result, people could pollute less by changing car use — that’s not happening.” We should note, though, that Royal’s own tenure as energy minister was marked by the very costly withdrawal of a carbon tax on HGVs, and her own acquiescence to protestors.

British Columbia, in Canada, is often cited as an example of a successful carbon tax introduction — where a majority are now in favour of it. Firstly, the tax aimed for “revenue neutrality” in that any payment disproportionately affecting the poor was offset by tax breaks. Secondly, there were visible and well-communicated contributions from the tax to beneficial climate-related public projects in the area. Perhaps most importantly, carbon tax increases were gentler than in France and came at a time of relative oil prosperity. Now Canada’s national carbon tax targets companies rather than individual fuel users.

U-Turn or an Acceleration?

The focus of protests in France has since changed and parts of the government have suggested they could look to reintroduce the fuel tax with some lessons perhaps learnt. As energy minister François de Rugy has said: “We can’t carry on telling the public that everything is going into the general state budget. 100% of the tax must go to the ecological transition”.

The most difficult part of any reintroduction will be the considerable cost of investment in communities that are hit harder by tax rises. This kind of tax has been poorly targeted, and it’s very difficult to use a tax in a way that doesn’t harm the poorer in society without enormous and extensive research on cushioning its impact.

Whether wider environmental policy has suffered because of the Gilet Jaunes protests is debateable. There were problems with the Macron presidency and environmental policy before the start of the protests. Nicolas Hulot resigned as energy minister in late summer 2018, saying that the government was doing far too little to combat climate change. François De Rugy, Hulot’s successor, is disliked by many ecologists and his tenure thus far has seen a continuation of parts of the energy transition, but France’s recent energy plans for the next decade (The PPE), set out a few weeks ago, showed a weakening of environmental ambition — with Nuclear and coal phaseout timetables extended and modified from those set out by Hulot.

Matthieu Orphelin, meanwhile, one of the principle climate activists in the French parliament, has now resigned from En Marcheciting “insufficient ambition” on climate. On the other hand public concern about climate change in France is still strong, with about 80% of people regarding it as a national priority; a recent NGO-led petition (on raising French climate ambition) receiving considerable popular support (with more than 2 million signatures) and legal action against the Government on climate issues continuing apace.

The fundamental difficulties for France on climate policy are similar to those of most EU member states: 1) the long-term nature of decision-making fails to compete with a short-term political cycle and 2) climate and environment policy are hard to integrate into the Government’s central decision-making process (it is, for example, interesting to see the UK Labour party considering climate change decisions being taken more centrally in government).

Despite rhetoric, Emmanuel Macron and Edouard Phillipe have never seriously regarded climate policy as a central priority above other reforms, despite the Paris Agreement (maybe Hollande, Fabius and Royal did more) and, despite climate policy forming part of France’s “Grand Debat” on future policy, the Gilet Jaunes has not helped government to focus on the climate more.

Furthermore, the French public still doesn’t understand environmental taxes enough to support them. There is profound ambivalence in French society about ecological issues, with on the one hand widespread support for measures against environmental damage but, on the other, huge conservative resistance against specific policies. For instance, the majority of the population are convinced that vehicle pollution is a public health issue but when specific measures have been taken there has been almighty fuss —such as with the fuel tax and diesel prices.

When Parisian Mayor Anne Hidalgo, closed an urban motorway, the Paris region decried a measure which was allegedly socially and geographically discriminating, and their appeal to the administrative courts was temporarily successful. France’s Green tax on HGVs was opposed on similar grounds and, despite the huge expense that went into the supporting infrastructure, the opposition to it won. No mobs descended on the streets in support of these ecological policies and this grass roots ambivalence was bound to find political expression.

Another issue is that despite huge public concern about climate change, the electoral impact and spread of this concern is particularly chaotic. The French Greens have never been especially organised or effective as a political movement (unlike in, for example, Germany, the Netherlands and, increasingly it seems, Belgium) and not long after they were invited to join the government in 2012, what popular support they had fell apart. The leading environmentalists, Cohn-Bendit and Hulot are dismayed by the Greens and the vast majority of the 80% don’t prioritise environmental issues in their voting behaviour despite concerns expressed in polls. All parties have given token support to environmental issues and one has to remain hopeful that this will soon change.

As oil prices start rising again, it’s essential that the lessons from carbon tax are learned. Any green tax would be improved by being adequately communicated and accompanied with measures to ensure what is still rather nebulously called “a just transition”. In tough economic times, this is only becoming more urgent.